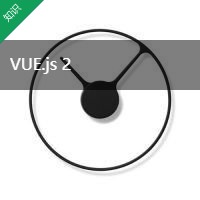 In-template expressions are very convenient, but they are really only meant for simple operations. Putting too much logic into your templates can make them bloated and hard to maintain. For example:

At this point, the template is no longer simple and declarative. You have to look at it for a second before realizing that it displays message in reverse. The problem is made worse when you want to include the reversed message in your template more than once.

That’s why for any complex logic, you should use a computed property.

You can open the console and play with the example vm yourself. The value of vm.reversedMessage is always dependent on the value of vm.message.

You can data-bind to computed properties in templates just like a normal property. Vue is aware that vm.reversedMessage depends on vm.message, so it will update any bindings that depend on vm.reversedMessage when vm.message changes. And the best part is that we’ve created this dependency relationship declaratively: the computed getter function has no side effects, which makes it easy to test and reason about.

You may have noticed we can achieve the same result by invoking a method in the expression:

This also means the following computed property will never update, because Date.now() is not a reactive dependency:

In comparison, a method invocation will always run the function whenever a re-render happens.

Why do we need caching? Imagine we have an expensive computed property A, which requires looping through a huge Array and doing a lot of computations. Then we may have other computed properties that in turn depend on A. Without caching, we would be executing A’s getter many more times than necessary! In cases where you do not want caching, use a method instead.

Vue does provide a more generic way to observe and react to data changes on a Vue instance: watch properties. When you have some data that needs to change based on some other data, it is tempting to overuse watch - especially if you are coming from an AngularJS background. However, it is often a better idea to use a computed property rather than an imperative watch callback. Consider this example:

The above code is imperative and repetitive. Compare it with a computed property version:

Much better, isn’t it?

Computed properties are by default getter-only, but you can also provide a setter when you need it:

Now when you run vm.fullName = 'John Doe', the setter will be invoked and vm.firstName and vm.lastName will be updated accordingly.

While computed properties are more appropriate in most cases, there are times when a custom watcher is necessary. That’s why Vue provides a more generic way to react to data changes through the watch option. This is most useful when you want to perform asynchronous or expensive operations in response to changing data.

In this case, using the watch option allows us to perform an asynchronous operation (accessing an API), limit how often we perform that operation, and set intermediary states until we get a final answer. None of that would be possible with a computed property.

In addition to the watch option, you can also use the imperative vm.$watch API.

© 2013–2017 Evan You, Vue.js contributors
Licensed under the MIT License.
https://vuejs.org/v2/guide/computed.html