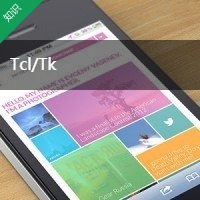 The catch command may be used to prevent errors from aborting command interpretation. The catch command calls the Tcl interpreter recursively to execute script, and always returns without raising an error, regardless of any errors that might occur while executing script.

If the optionsVarName argument is given, then the variable it names is set to a dictionary of return options returned by evaluation of script. Tcl specifies two entries that are always defined in the dictionary: -code and -level. When the return code from evaluation of script is not TCL_RETURN, the value of the -level entry will be 0, and the value of the -code entry will be the same as the return code. Only when the return code is TCL_RETURN will the values of the -level and -code entries be something else, as further described in the documentation for the return command.

When the return code from evaluation of script is TCL_ERROR, four additional entries are defined in the dictionary of return options stored in optionsVarName: -errorinfo, -errorcode, -errorline, and -errorstack. The value of the -errorinfo entry is a formatted stack trace containing more information about the context in which the error happened. The formatted stack trace is meant to be read by a person. The value of the -errorcode entry is additional information about the error stored as a list. The -errorcode value is meant to be further processed by programs, and may not be particularly readable by people. The value of the -errorline entry is an integer indicating which line of script was being evaluated when the error occurred. The value of the -errorstack entry is an even-sized list made of token-parameter pairs accumulated while unwinding the stack. The token may be “CALL”, in which case the parameter is a list made of the proc name and arguments at the corresponding level; or it may be “UP”, in which case the parameter is the relative level (as in uplevel) of the previous CALL. The salient differences with respect to -errorinfo are that:

Tcl packages may provide commands that set other entries in the dictionary of return options, and the return command may be used by scripts to set return options in addition to those defined above.

The catch command may be used in an if to branch based on the success of a script.

There are more complex examples of catch usage in the documentation for the return command.