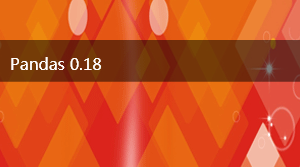 pandas consists of the following things

Data structures at a glance

Why more than 1 data structure?

Also, we would like sensible default behaviors for the common API functions which take into account the typical orientation of time series and cross-sectional data sets. When using ndarrays to store 2- and 3-dimensional data, a burden is placed on the user to consider the orientation of the data set when writing functions; axes are considered more or less equivalent (except when C- or Fortran-contiguousness matters for performance). In pandas, the axes are intended to lend more semantic meaning to the data; i.e., for a particular data set there is likely to be a “right” way to orient the data. The goal, then, is to reduce the amount of mental effort required to code up data transformations in downstream functions.

For example, with tabular data (DataFrame) it is more semantically helpful to think of the index (the rows) and the columns rather than axis 0 and axis 1. And iterating through the columns of the DataFrame thus results in more readable code:

Mutability and copying of data

All pandas data structures are value-mutable (the values they contain can be altered) but not always size-mutable. The length of a Series cannot be changed, but, for example, columns can be inserted into a DataFrame. However, the vast majority of methods produce new objects and leave the input data untouched. In general, though, we like to favor immutability where sensible.

The first stop for pandas issues and ideas is the Github Issue Tracker. If you have a general question, pandas community experts can answer through Stack Overflow.

Longer discussions occur on the developer mailing list, and commercial support inquiries for Lambda Foundry should be sent to: support@lambdafoundry.com

pandas development began at AQR Capital Management in April 2008. It was open-sourced at the end of 2009. AQR continued to provide resources for development through the end of 2011, and continues to contribute bug reports today.

Since January 2012, Lambda Foundry, has been providing development resources, as well as commercial support, training, and consulting for pandas.

pandas is only made possible by a group of people around the world like you who have contributed new code, bug reports, fixes, comments and ideas. A complete list can be found on Github.

pandas is a part of the PyData project. The PyData Development Team is a collection of developers focused on the improvement of Python’s data libraries. The core team that coordinates development can be found on Github. If you’re interested in contributing, please visit the project website.