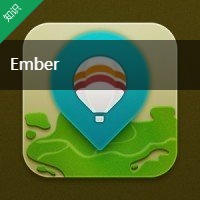 This generates this file:

moduleForAcceptance deals with application setup and teardown. The last few lines, within the function test, contain an example test.

Almost every test has a pattern of visiting a route, interacting with the page (using the helpers), and checking for expected changes in the DOM.

One of the major issues in testing web applications is that all code is event-driven and therefore has the potential to be asynchronous (i.e. output can happen out of sequence from input). This has the ramification that code can be executed in any order.

An example may help here: Let's say a user clicks two buttons, one after another and both load data from different servers. They take different times to respond.

When writing your tests, you need to be keenly aware of the fact that you cannot be sure that the response will return immediately after you make your requests, therefore your assertion code (the "tester") needs to wait for the thing being tested (the "testee") to be in a synchronized state. In the example above, that would be when both servers have responded and the test code can go about its business checking the data (whether it is mock data, or real data).

This is why all Ember's test helpers are wrapped in code that ensures Ember is back in a synchronized state when it makes its assertions. It saves you from having to wrap everything in code that does that, and it makes it easier to read your tests because there's less boilerplate in them.

Asynchronous helpers are "aware" of (and wait for) asynchronous behavior within your application, making it much easier to write deterministic tests.

Also, these helpers register themselves in the order that you call them and will be run in a chain; each one is only called after the previous one finishes. You can rest assured, therefore, that the order you call them in will also be their execution order, and that the previous helper has finished before the next one starts.

The andThen helper will wait for all preceding asynchronous helpers to complete prior to progressing forward. Let's take a look at the following example.

First we visit the new posts URL "/posts/new", enter the text "My new post" into an input control with the CSS class "title", and click on a button whose class is "submit".

We then make a call to the andThen helper which will wait for the preceding asynchronous test helpers to complete (specifically, andThen will only be called after the new posts URL was visited, the text filled in and the submit button was clicked, and the browser has returned from doing whatever those actions required). Note andThen has a single argument of the function that contains the code to execute after the other test helpers have finished.

In the andThen helper, we finally make our call to assert.equal which makes an assertion that the text found in the first li of the ul whose class is "posts" is equal to "My new post".

The helper method will always be called with the current Application as the first parameter. Other parameters, such as assert, need to be provided when calling the helper. Helpers need to be registered prior to calling startApp, but ember-cli will take care of it for you.

Here is an example of a non-async helper:

Here is an example of an async helper:

Async helpers also come in handy when you want to group interaction into one helper. For example:

In tests/helpers/start-app.js you need to import the helper file: it will be registered then.