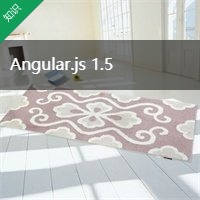 The ngModel directive binds an input,select, textarea (or custom form control) to a property on the scope using NgModelController, which is created and exposed by this directive.

ngModel is responsible for:

Note: ngModel will try to bind to the property given by evaluating the expression on the current scope- If the property doesn't already exist on this scope, it will be created implicitly and added to the scope-

For basic examples, how to use ngModel, see:

By default, ngModel watches the model by reference, not value. This is important to know when binding inputs to models that are objects (e.g. Date) or collections (e.g. arrays). If only properties of the object or collection change, ngModel will not be notified and so the input will not be re-rendered.

The model must be assigned an entirely new object or collection before a re-rendering will occur.

The $watchCollection() method only does a shallow comparison, meaning that changing properties deeper than the first level of the object (or only changing the properties of an item in the collection if it's an array) will still not trigger a re-rendering of the model.

The following CSS classes are added and removed on the associated input/select/textarea element depending on the validity of the model.

Keep in mind that ngAnimate can detect each of these classes when added and removed.

Animations within models are triggered when any of the associated CSS classes are added and removed on the input element which is attached to the model. These classes include: .ng-pristine, .ng-dirty, .ng-invalid and .ng-valid as well as any other validations that are performed on the model itself. The animations that are triggered within ngModel are similar to how they work in ngClass and animations can be hooked into using CSS transitions, keyframes as well as JS animations.

The following example shows a simple way to utilize CSS transitions to style an input element that has been rendered as invalid after it has been validated:

Binding to a getter/setter

Sometimes it's helpful to bind ngModel to a getter/setter function. A getter/setter is a function that returns a representation of the model when called with zero arguments, and sets the internal state of a model when called with an argument. It's sometimes useful to use this for models that have an internal representation that's different from what the model exposes to the view.

Best Practice: It's best to keep getters fast because Angular is likely to call them more frequently than other parts of your code.

The following example shows how to use ngModel with a getter/setter: